Are You Considering A Natural Burial?

Posted on November 10, 2021 by Ash under Uncategorized
Comments Off on Are You Considering A Natural Burial? 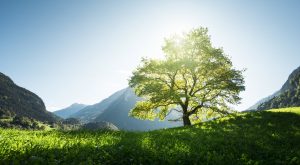 Idyllic landscape in the Alps, tree, grass and mountains, Switzerland

Interest in green or natural burials has continued to increase in recent years. While this burial method may seem novel to some, it is not new and is the manner in which most humans have been laid to rest for thousands of years.

What are the Benefits of Natural Burials?

There are numerous advantages that come from natural burials. However, these benefits are mainly for the living rather than the deceased. The first is the cost. Traditional funerals and burials are too expensive for many. Research shows that by comparison, a natural burial costs about 1/3 the price of a traditional burial. For low-income families and those that have limited funds, this is very attractive.

The second reason is environmental. Even among those that have the money to pay for a traditional burial, some are still choosing a natural burial instead since they care about the environment and do not want to cause any unnecessary damage to it. These adherents point out that there isn’t much to gain for the deceased, who don’t know how they’re being laid to rest, and natural burials are the way nature intended it.

Why Some People Fear Natural Burials

The usage of conventional caskets and embalming fluid to slow decomposition and keep the body away from the soil is seen by some as being a manifestation of our inherent fear of death. To be sure, the effects of decomposition on the body are not pleasant, but environmentalists point out that this is what is supposed to happen, and the whole purpose of burial is to keep the process from being seen by the living.

Supporters of natural burials also point out that the higher costs of embalming and traditional caskets will only delay the inevitable. Eventually, after enough time has passed, even the well-made coffins will break down into the soil and the embalmed corpses within will return to it.

The difference between traditional and natural burials is that traditional burials cause tremendous damage to the environment. While a single traditional burial and interment will have minimal impact, when you consider the fact that there are billions of people alive today who will eventually need to be laid to rest, the consequences of doing so in a traditional manner would have devastating ecological consequences.

Research shows that desire for a green burial has increased to sixty-four percent among adults compared to just forty-three percent a few years ago. And while the exact percentage of natural burials is not currently being tracked, those in the funeral industry believe that these numbers will increase in the coming years.

As such, a growing number of funeral homes have begun offering green options. An organizational no-profit called Green Burial Council has been established which has developed specific standards for this industry. There are currently hundreds of funeral homes from coast to coast that provide green services.